Hello! It’s definitely been a while since I’ve managed to scrape aside time from life here to blog — I’ve been using every spare moment to get extra sleep, and I’ve also been enjoying the company of the friends I’ve made here. 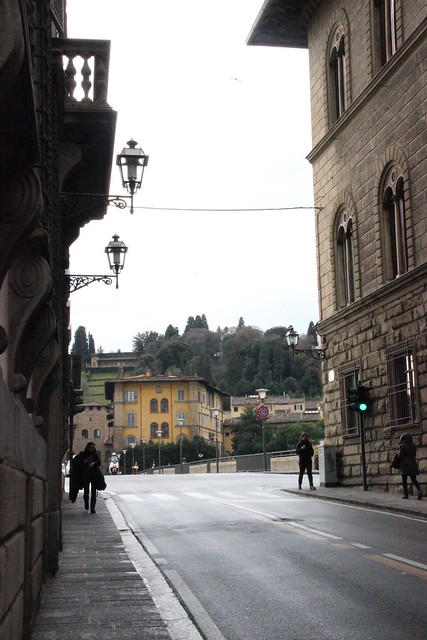 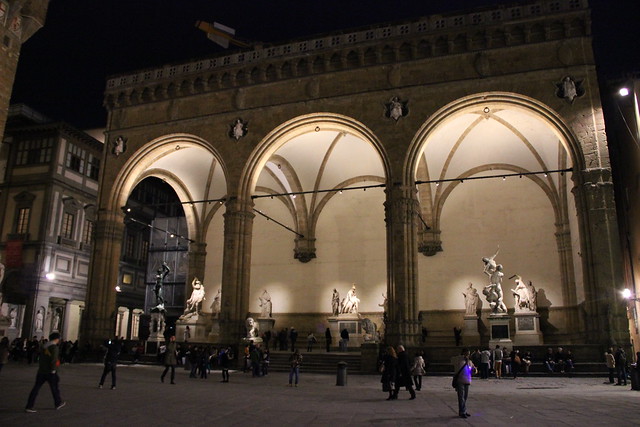 It feels like a lifetime ago that I lived in California, ignorant of the everyday bits of life that make Florence special. I love living in Florence. I love Italy. I’ve made friends and good acquaintances here, American and Italian.

I’ve been locked away indoors the past two weeks scrambling to work on final projects for all of my classes. I don’t think I’ll be able to see much of Florence these remaining few days; it’s the sacrifice I make to salvage my academics this semester — it’s been tough balancing this adventure with schoolwork when the outside world is fascinating.

I won’t make this blog post my final good bye to Italy.

I’ve just had so many thoughts go through my head these past many days. In some ways it’s a pity I’ll be leaving just as I feel I’ve gotten the hang of things here, but there are also things I’m excited for when I return home — seeing friends, my boyfriend, and dogs. Getting to mountain bike again, and take the liberty of sleeping in. I’m excited to have access to certain foods too, like good Mexican food and all the gluten-free things that await me at home.

However, I’m also aware of the things I’ll lose; I’ll lose the freedom of stepping out my front door and entering a city of adventure. I’ll miss being able to take a stroll around the city and stopping by my friends’ apartments to say hello or have some tea. I’ll miss seeing my Italian buddies around the city in restaurants and my neighborhood Tabacchi (a small store that sells stamps, loto tickets, cigarettes, candy, water and the like), from which I’d manically buy stamps and water bottles. 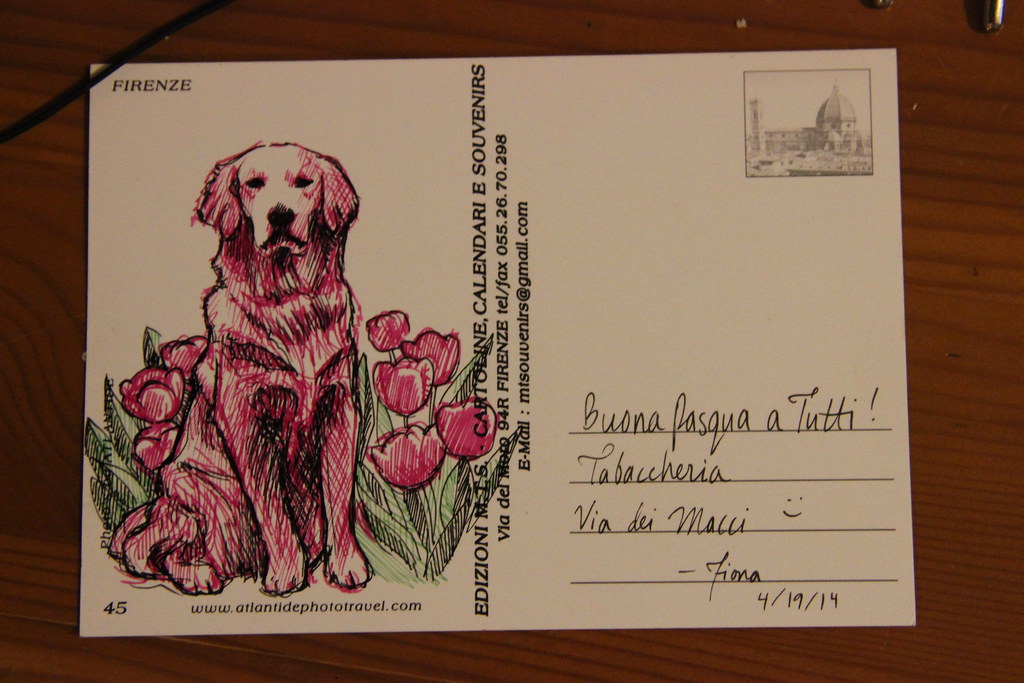 I drew on a postcard and gave it to the Via dei Macci Tabbachi store owners yesterday. Buona Pasqua = Happy Easter. I’ll be trying to draw little things for my Florentine buddies before I go.

I’ll miss laughing at the creeper Italian men with my friends, and maybe even the gypsies (only a little).

What I’m counting on is that I’ll take with me the things that matter. I’ll keep the moments, stories and the things I’ve seen. 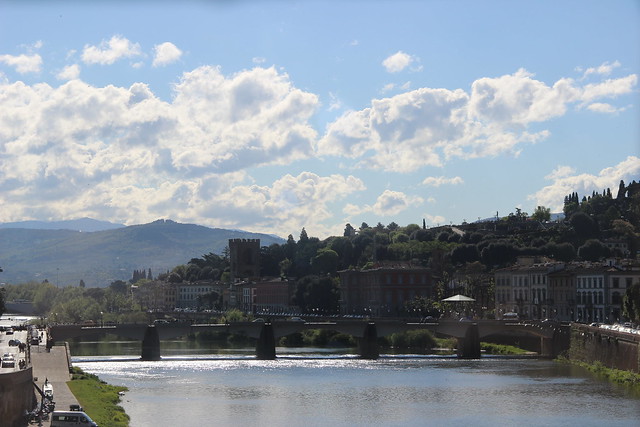 View of the Arno out of the Vasari Corridor. 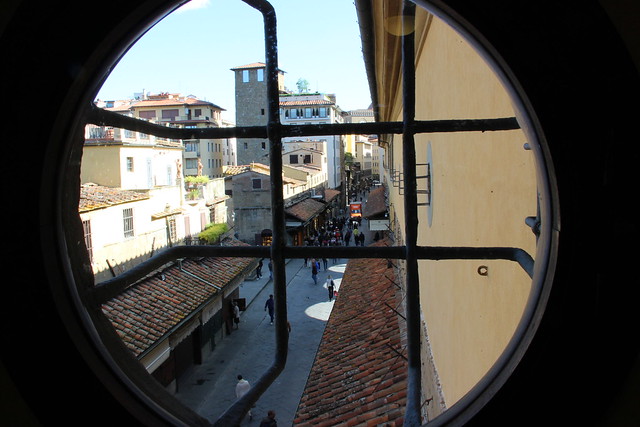 View out of the Vasari Corridor (the hallway that runs along the top of the Ponte Vecchio). 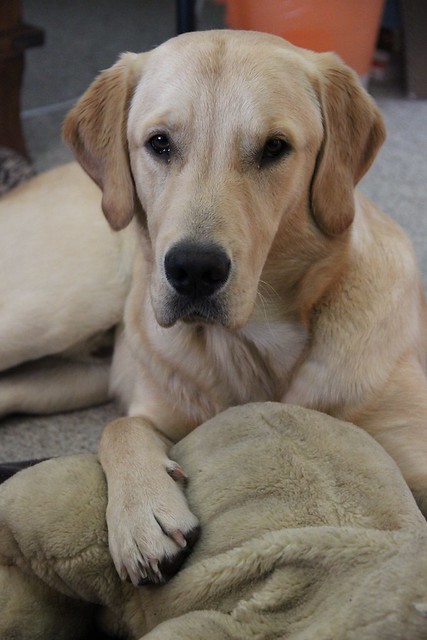 I’ll be seeing Leonard! He’s a service dog in training from Bergin University of Canine Studies that my mom and I have been raising. I’m excited to see (and hug) this boy when I get home! I’ve been skyping him 🙂 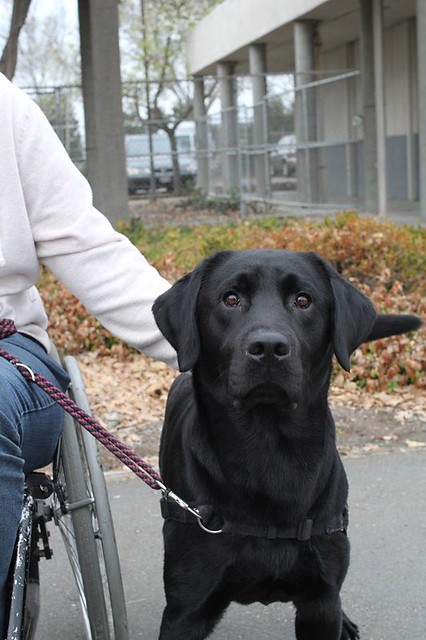 (Not my photo)
And finally, Ibarra will be coming to visit me. He is one of the other service dogs I’ve raised for a year. He’s currently in-training with an associate student at Bergin University of Canine Studies.
More posts to follow, as I fill this blog with all of my adventures  (and photos) 🙂

I signed up to take the Italian cooking class offered through my study abroad program, AIFS!

We met on the Ponte Vecchio and were led to the kitchen of the restaurant “In Tavola” across the bridge by an AIFS staff member. I let AIFS know before hand that I’m gluten free so that they could inform the restaurant and make adjustments for me.

We entered the kitchen through a back street, put on plastic aprons, and right after that the lead chef yelled out “who is my gluten-free?!” I yelled back “me!” and immediately got put in charge of stirring panna cotta on the stove top.

A group of my classmates blending the sformato.

Mikaela and I in our awesome plastic aprons.

The teacher/chef demonstrating how to make the ravioli pasta.

We got to use a pasta machine!

We learned how to shape raviolis too! (These are not gluten free)

Since the sformato contained some gluten, the teacher/chef made me an artichoke appetizer.

Sformato di verdure!
After we finished cooking, we were led downstairs to a room of the restaurant where we got to eat the dinner we had made together 🙂

The teacher/chef made me my own (huge) bowl of gluten free pasta with tomato sauce — it was really good.

Dinner in a cool, underground room!

And finally.. Panna cotta for dessert! There is some strawberry sauce poured on top (just strawberries and sugar blended into smithereens). I’m a panna cotta fan so I enjoyed myself!
At the end we were given a little booklet with all the recipes we’d made that day.
Tips for Italian cooking classes:

Monday: I decided to go out into the city and wander around and ended up across the river in the other half of the city. (I don’t have classes on Monday).

I hiked up some random grassy slopes and found myself in the Piazzale Michelangelo, a famous square with a fantastic, panoramic view of Florence.

The beautiful bridges that connect the two halves of the city. The Ponte Vecchio (the biggest one) was the only one spared during bombing of the other bridges by the Germans as they retreated in 1944 during World War II. (It crosses the shallowest part of the river, so that area of the river could have been rapidly crossed even if the bridge had been destroyed.) This is why the Ponte Vecchio is the oldest bridge.

The seam between the city and country (view from Piazzale Michelangelo).

I continued uphill and soon arrived at a white church, the Basilica di San Miniato al Monte (“St. Minias on the Mountain”).

The church had an enormous cemetery, with family tombs and a lot of statues. I spent a while walking around .

The bell tower of the church.

I think these are family tombs.

That large angel statue was so cool! Her wings are so slim and gorgeous.

I love those wings so much.

Super random carving. Not sure why there’s an octopus on this child’s grave.

View from the church’s steps as I was leaving.

My own Duomo photograph!

Walking downhill, I stopped at the rose garden (which is open to the public). None of the roses bloomed yet (usually that happens in May).

Trapped in the rose garden — I didn’t realize there’s only one way in and out.

I really liked the other side of the city, and stopped by a grocery store there.

I stumbled across the Piti palace, but my favorite part was seeing the Ponte Vecchio (the “Old Bridge,” the lower half of which is filled with stores that sell gold, and the upper part originally served as a walkway between the two palaces of the wealthy Medici family).

Just casually bicycling and talking on the phone.

I bought some postcards and stamps utilizing my (patchy) Italian! I asked “Hai fracobollo?” = Do you have stamps? I also took some photos of the municipal police officers wandering around the city.

Police – There are three types of police in Florence:

Side note: female police officers in Florence can be very cheery and helpful, helping tourists with directions and taking their pictures. They also wear make-up and can keep their hair down.

Some sort of desperate (and creepy) marketing failure.

And while we’re on the topic of failure, check out these portable yetti feet.

Map of where I walked.

Evening: One of my study abroad classmates couldn’t make it to the wine tasting class  and she let me have her spot, so Elizabeth and I dressed up and went to a lecture packed with information about wine (Elizabeth’s learning about the wine business, and I was just the tag-along.

Zola! She belongs to one of the AIFS staff. She’s a sweetie.

Me in Lucca, Italy on a bicycle!

Hi, I'm new to blogging, and some posts are still being configured. Poke around! -Fi